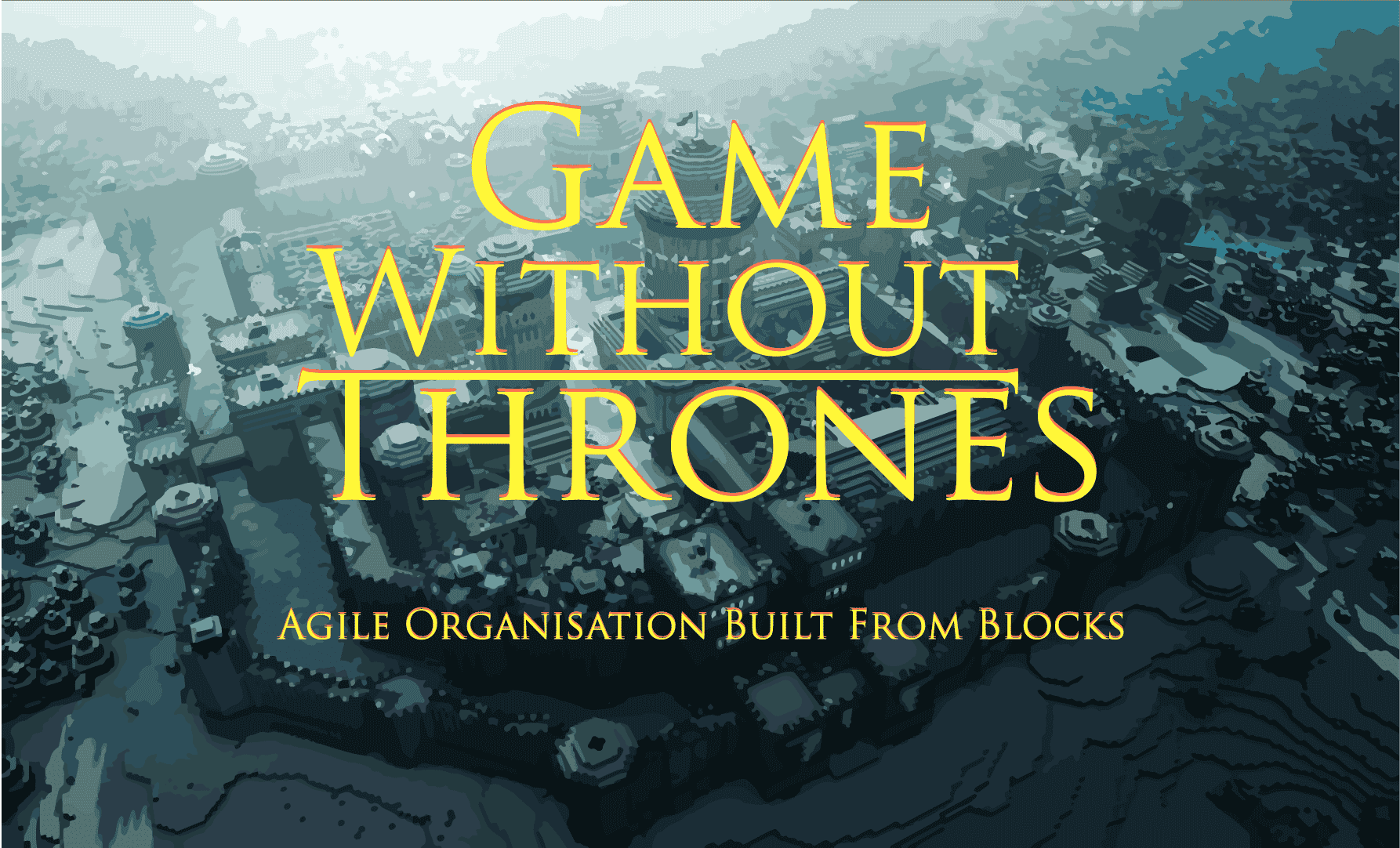 We use blocks and figurines to teach you how Agile Organizations work, with no command and control, but instead chapter meetings, tribal treaties, small councils, Leadership as a Service. The game aligns autonomous teams into self-managing streams, and the wit and wisdom of Wildlings …

You don’t need to have read or watched any “Game of Thrones” related material, we just use castles and dragons as metaphor for real life organisational activities and challenges.

The simulation gives participants a hands-on experience of using some of the core Agile patterns taught in the XBAP course, including:

We’ll keep the squads to the optimum size – just 6, and we’ll give each of the 6 squad members a chapter, and let the chapter meetings cross-link squads:

But who builds? Everyone builds. These roles are analytic perspectives, not hierarchical positions. Everyone loves to work with the Lego so it isn’t fair to shut anyone out of it.

Leadership as a Service

Every team has need of leadership yet good leaders are hard to find. So both at squad and council levels we use a simple protocol to supply leadership when and only when a team needs it. It’s called Leadership as a Service: 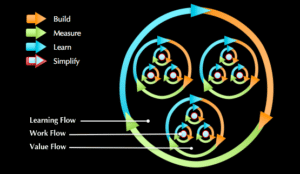 You can plan and release in months and quarters if that suits you, but the plans are continuously maintained, not left to go stale in the face of current learnings.

In this game our build-measure-learn cycles are synchronised to four 5-minute ceremonies. Real world Agile Organizations have a more drawn out cadence than this, but the dynamics remain the same: 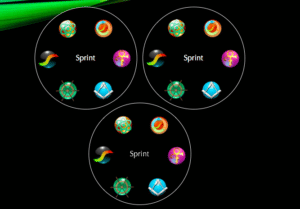 where each squad builds and integrates features of the castle. Squads work in their own areas and don’t attempt to integrate their work until the third ceremony …

During the Sprint Squads work separately in their own area – they won’t integrate their solutions with the rest of the castle until the Refactoring ceremony. In Sprint Zero, a squad is concerned with getting into a collaborative cadence and sketching out broad strokes for the layout of the castle as a whole.

The Small Council meeting will define real priorities for Sprints after that.

The main problem for a game-runner during a Sprint is how to get people to stop playing when it’s is done.

where people of the same role share their learnings between squads and propose features and treaties.

Each chapter’s purpose is to share learnings across squads. The obsolete “Scrum of Scrums” pattern provides too little bandwidth to do this effectively. During chapter meetings all the analysts meet each other, all the architects meet each other, and so on, rather than meeting with members of their own squads. 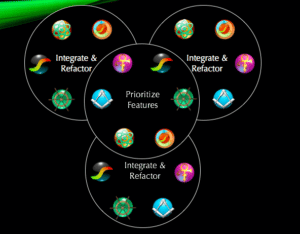 where the squads work mob-programming-style to integrate their new features into the castle while paying down technical debt, and the Small Council meets to prioritise the features that were just proposed by the chapter meetings.

In the real world, Refactoring is essential to continuously pay down tech debt. It ensures the design of each part is the simplest that can possibly work while the whole is balanced in the face of change. In our game, with no fixed product backlogs, there’s plenty of that!

As embodied in the Haudenosaunee council tradition employed by modern day Mohawks and their brother nations in the Native American Iroquois Confederacy, a living tradition in continuous use since the 13th century, a consensus council is made of representatives of its constituent chapters.

While the squads refactor the castle, the Council for Small Matters prioritises new features. It’s made up of reps from each of the Chapters and coached by the representative of the Coach Chapter. Representation rotates from release to release to prevent hierarchy forming. Otherwise we would need a throne … 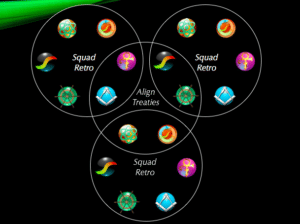 where everyone rejoins their squads to adapt its way of working to what they’ve learned in the chapters and from refactoring, and to align treaties between the squads. The council members act as bridges between the retros when treaties need modification and ratification.

The retrospective is where a squad decides how it will change the way it works in the next sprint.

XBA: Training in Exponential Business Agility, including ‘Game without Thrones’

We would be happy to welcome you to the first, ‘Game without Thrones’ in London! … and we hope to see you there!

This site uses Akismet to reduce spam. Learn how your comment data is processed.

Sign up to get our latest news and updates on our new courses!

Your contact information will never be shared by us to anyone without your consent!

Kanban is a strategy for optimizing the flow of stakeholder value through a process that uses a visual, work-in-progress limited, pull based system. The name comes from the … END_OF_DOCUMENT_TOKEN_TO_BE_REPLACED

We use cookies on our website to give you the most relevant experience by remembering your preferences and repeat visits. By clicking “Accept”, you consent to the use of ALL the cookies. However you may visit Cookie Settings to provide a controlled consent.
Cookie settingsACCEPT
Manage consent

This website uses cookies to improve your experience while you navigate through the website. Out of these cookies, the cookies that are categorized as necessary are stored on your browser as they are essential for the working of basic functionalities of the website. We also use third-party cookies that help us analyze and understand how you use this website. These cookies will be stored in your browser only with your consent. You also have the option to opt-out of these cookies. But opting out of some of these cookies may have an effect on your browsing experience.
Necessary Always Enabled
Necessary cookies are absolutely essential for the website to function properly. These cookies ensure basic functionalities and security features of the website, anonymously.
Functional
Functional cookies help to perform certain functionalities like sharing the content of the website on social media platforms, collect feedbacks, and other third-party features.
Performance
Performance cookies are used to understand and analyze the key performance indexes of the website which helps in delivering a better user experience for the visitors.
Analytics
Analytical cookies are used to understand how visitors interact with the website. These cookies help provide information on metrics the number of visitors, bounce rate, traffic source, etc.
Advertisement
Advertisement cookies are used to provide visitors with relevant ads and marketing campaigns. These cookies track visitors across websites and collect information to provide customized ads.
Others
Other uncategorized cookies are those that are being analyzed and have not been classified into a category as yet.
Save & Accept